Source Audio’s brand new True Spring Reverb is a pedal you just have to try! We were blown away when we had a chance to use their Ventris pedal, creating surf-rock reverb tones not heard since the 60’s. Source Audio have taken the reverb from the Ventris and paired it with the also highly acclaimed Vertigo tremolo. Read on for a detailed look at the True Spring Reverb…

Comprised of two distinct sections, the True Reverb pedal gives you a complete and authentic reverb sound on your pedalboard! Source Audio have handcrafted the effects engines and housed them in high-powered 56-bit DSP. The years of collective experience and hard work from engineers Bob Chidlaw and Jesse Remignanti mean this pedal offers immense sound quality with all the subtleties of actual gear. 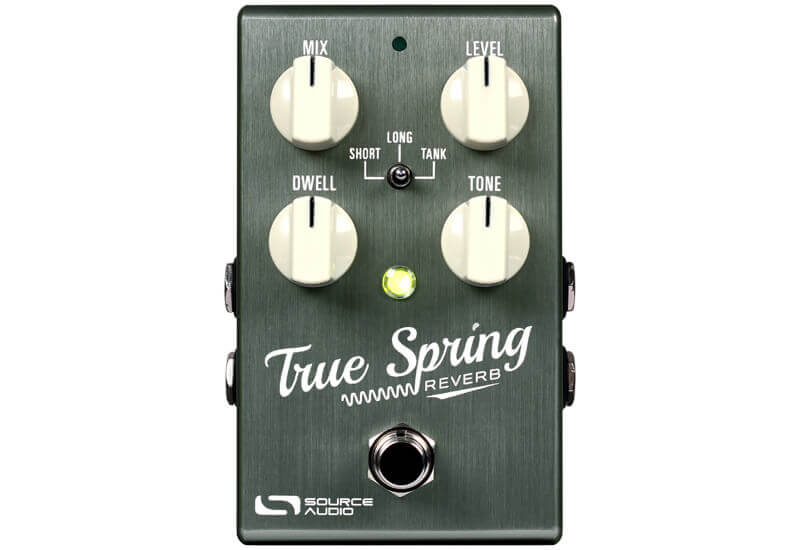 Source Audio give you a selection of three authentic-sounding spring reverbs from which to choose. Based on an original mechanical design found in the Hammond Organ from the 1930s, which Leo Fender then adopted for the “blackface” amplifier series.

Short Spring Reverb: Based closely on twangy 1960s “blackface” Fender amps. Some of these amps offered tighter tones while others had long and colourful reverb tails. Source Audio have aimed this setting to replicate a quicker decay with short and smooth trails.

Long Spring Reverb: Designed to produce a longer, deeper reverb with a noticeable “drip” and very lively trails. The middle ground setting; longer than SHORT but not as dramatic as TANK. All in all, this gives a very authentic representation of the reverbs found in vintage combo amplifiers.

Any of the three reverb effects can be combined with any of the three onboard tremolo effects. These organic effects first appeared in Source Audio’s award-winning Vertigo.

Opto Tremolo: This is a replication of the optical tremolo, the effect found in many combo amps from the 60s. This version relies on a neon light bulb and a light dependent resistor called an optocoupler. Consequently, this produces a distinctive choppy sonic character

Harmonic Tremolo: Reminiscent of a phase, this unique was first used in the Fender’s “brownface” amplifiers manufactured between ’59 and ’63. Because the pedal alternately modulates the bass and treble levels, a complex tremolo effect is created. Believe us, it sounds incredible!

Bias Tremolo: This setting uses an LFO to modulate the bias voltage of an amplifier’s tubes. This pushes the tubes in and out of saturation, creating a gentle pulsing overdrive.

As with the majority of Source Audio’s lineup, the True Spring reverb increases its functionality through both Neuro Editor and MIDI. You can upload additional algorithms for free, customise and tweak your settings, and download presets from the Source Audio library. This extends the possibilities to practically limitless, as you tweak your pedal to become a bespoke and essential component of your rig!

Now check out the demo video below to see what the True Spring Reverb can do. We think the rendition of Dick Dale’s Miserlou sounds spot on!