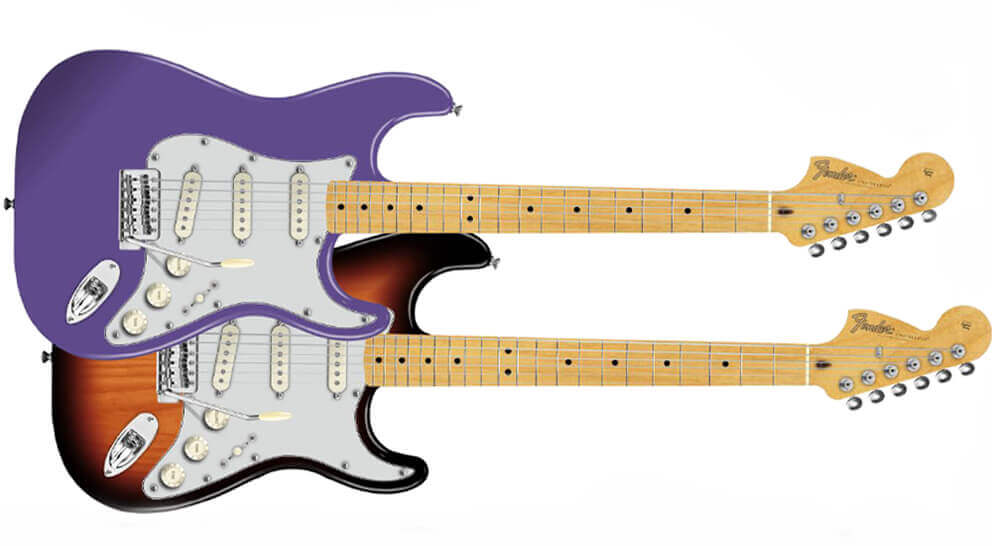 At some point, every player must have imagined riffing-off with one of the great Jimi Hendrix’s guitars. That ice cool look. That hot as heck sound. Well, the new Fender products have made that dream a reality with the new Jimi Hendrix Stratocaster.

The new release comes in two colours. First is the traditional 3-Tone Sunburst. While for the more extrovert of you, there’s a limited edition Ultraviolet. Regardless of which shade you prefer, the new Fender Hendrix Strat dishes out that same provocative tone as that same genius who graced our earth all those years ago. 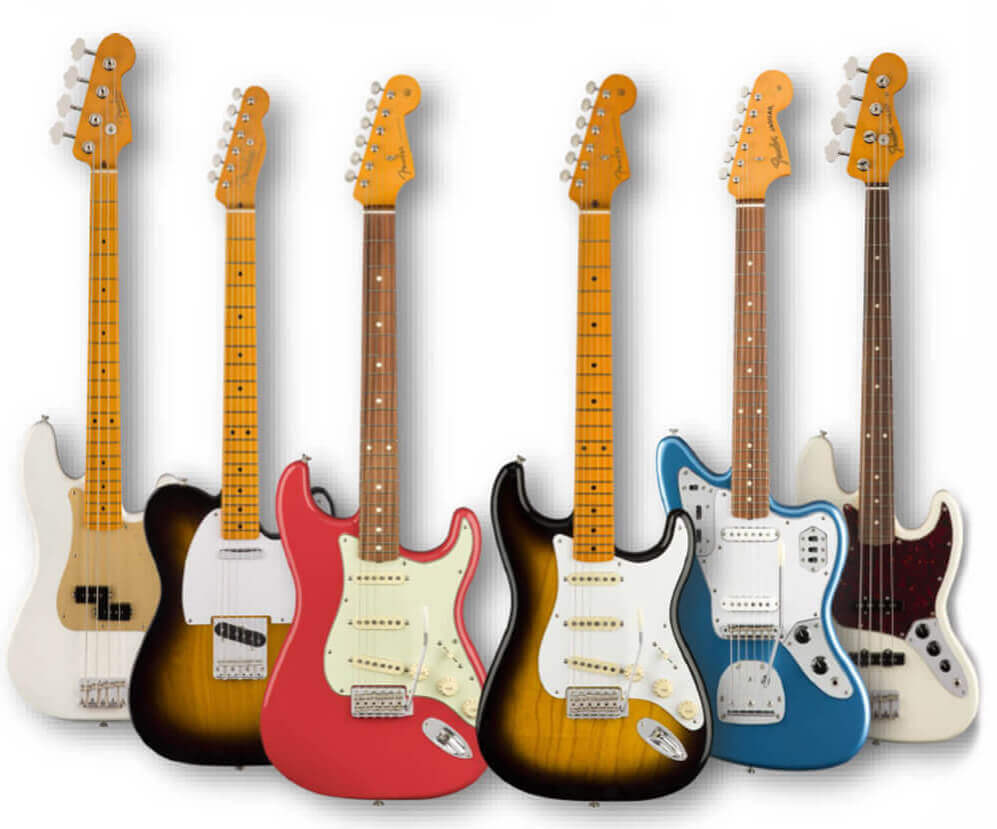 During the early days of rock music Fender became revolutionaries. They built guitars so darn good that they managed to shape the sound of popular music for years. And as those years went by Fender’s shapes became as iconic as the albums they helped to write. Although we can’t travel back in time, the new Fender products mean we can still own a chunk of wood that pays a fantastic homage to the development popular music.

Featuring a two-horned body shape, ‘soft V’ shaped maple neck, and 3 single coil pickups and tremolo bridge, the Classic Series ’50s Stratocaster redefined the possibilities for guitarists everywhere. Its 5-way pick up selector and control knobs still deliver incredible versatility, and the 2-tone Sunburst finish maintains its classic look. As the 60s kicked in so did the imaginations of guitarists. By helping to create new tones, styles and sounds, the Classic Series ’60s Stratocaster came into its own as a versatile tool for making music.

For players who desire that original-era Jaguar feel, the Classic Series ’60s Jaguar personifies the guitar in its debut decade. It features a pair of American Vintage ’65 single-coil pickups, a 6-saddle adjustable bridge and floating tremolo. With it’s fantastic versatility, the Jaguar sound sends you from coast-to-coast for the sun-soaked, reverb-drenched days of surf and psychedelia.

The unmistakable look of the Classic Series ’50s Telecaster. Simple, smart and elegant. It features a pair of single coil pickups, a C shaped maple neck and a classic string-through-body bridge. Although not quite as versatile as its Fender peers, its stunning tone and playability helped create a whole new sound for the 50s. Sure, it’s only rock ‘n’ roll, but we like it.

Back in the day, Fender introduced something new to rock ‘n’ roll.  And, if you’re looking for that same authentic, deep and powerful sound today, the Classic Series ’50s Precision Bass is your guy.  Featuring a single split-coil pickup and easy-to-play maple neck and fingerboard, it sounds as good today as it ever has done. Nothing screams ‘no nonsense’ like this White Blonde Precision Bass.

1960 saw the debut of Fender’s Jazz Bass. Its sound was as groundbreaking as the decade and gave bassists a powerful new tone. Featuring an ultra slim C shaped maple neck and pau ferro fingerboard, the Classic Series ’60s Jazz Bass is extremely comfortable and fast to play. Back then, it captured the sound of an era. Now, its pair of single coil pickups deliver a tone that’s still revered to this day.

For a while now, the Hot Rod has been the amplifier of choice for guitarists everywhere. There’s no wonder really. It delivers a superior, versatile tone and is easily transportable. Whether you’re gigging or rehearsing, it’s always proved itself to be powerful and reliable.

Now, Fender have released the Mk IV model which includes several new features. For instance, there’s the modified tone circuit that delivers enhanced tone clarity at higher gain levels. There’s an improved, smoother sounding reverb, too. And, it comes wrapped in a vintage-style blonde green textured vinyl. Add to this the installation of a well balanced 12″ Cannabis Rex speaker, and the Hot Rod executes a sound unheard in previous models.

A feature of the Hot Rod IV that makes it popular with heavy pedal users is the level of headroom it leaves. You can turn this bad lad’s clean channel right up without dirtying the tone, allowing the pedals to sound the way they are designed. Regardless of your board’s size, the limited edition Hot Rod Deluxe IV lets your unique tone shine through.

All in all, the Hot Rod IV is one sizzling combo amp. 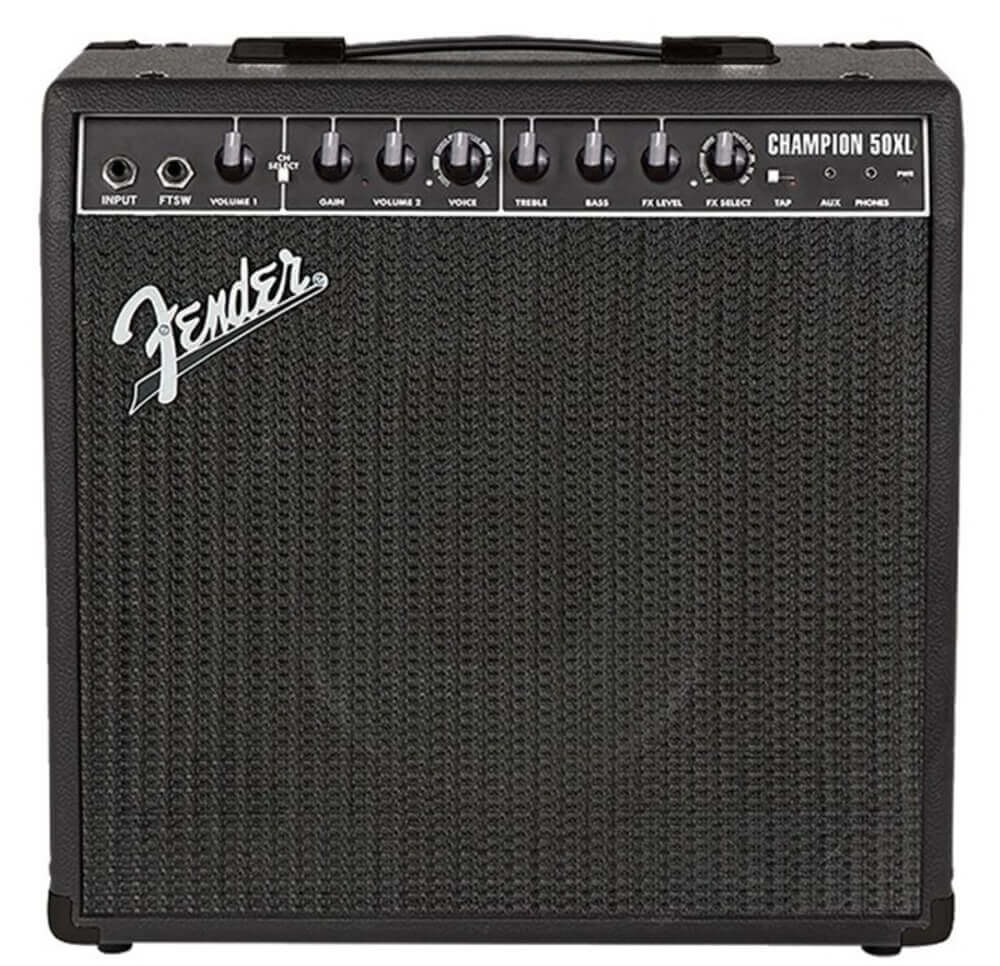 Another amp in this summer’s range of new Fender products. This time it’s the Limited Edition Champion 50XL.

This excellent and affordable amp comes with a heap of built in effects over a pair of versatile channels. One is based on the iconic Fender Blackface clean tone, an other other features several selectable amp voices. It includes a number of distortion effects that make it perfect for a variety of heavy guitar music, and four stompbox effects. As if that wasn’t enough, the Champion 50XL compressor and octaver effects, and an overdrive.  All of this sound is pumped out at 50W from a 12” Celestion Midnight 60 speaker, adding a rich tone, elevated output, and an accomplished sound.

So, there you have it. Another great summer delivered to you by one of music’s most iconic companies. Now, you just have to decide which of the new Fender products you’re going to add to your rig.