Posted on 9th November 2018 by Callum

“Big. Bold. Righteous.” That’s what Gretsch says about the beautiful new Limited-Edition G2420T-P90 Streamliner. And, to be fair, it’s hard to argue with that gambit. The G2420T-P90 is a commanding instrument that’s designed for the modern guitarist. Such is its outstanding quality that it will certainly please even the most powerful of players.

It features a set of incredible sounding pickups that give the player a vast array of tonal options. The single-coil P90 Dog Ear bridge pickup delivers a broad and fat tone, and, the Broad’Tron neck pickup gives off a uniquely throaty humbucker bite. Furthermore, the three-way toggle switch and dual volume/tone controls will help give you ultimate control over your sound.

It also features a 22-fret fingerboard that is made of a fast-playing rosewood.  Similarly, the thin U-shaped neck makes performing extremely comfortable. So, whether you’re jamming big chords or fat riffs, playing this beast is as easy as swallowing ice-cream.

The Limited-Edition G2420T-P90 Streamliner has everything you’d expect from one of the world’s greatest manufacturers of guitars. From the elegant hollow body and F-Holes to its laminated maple construction, everything on offer is indeed textbook Gretsch. Additionally, the Bigsby-licenced B60 vibrato tailpiece helps add character and expression to your performance. 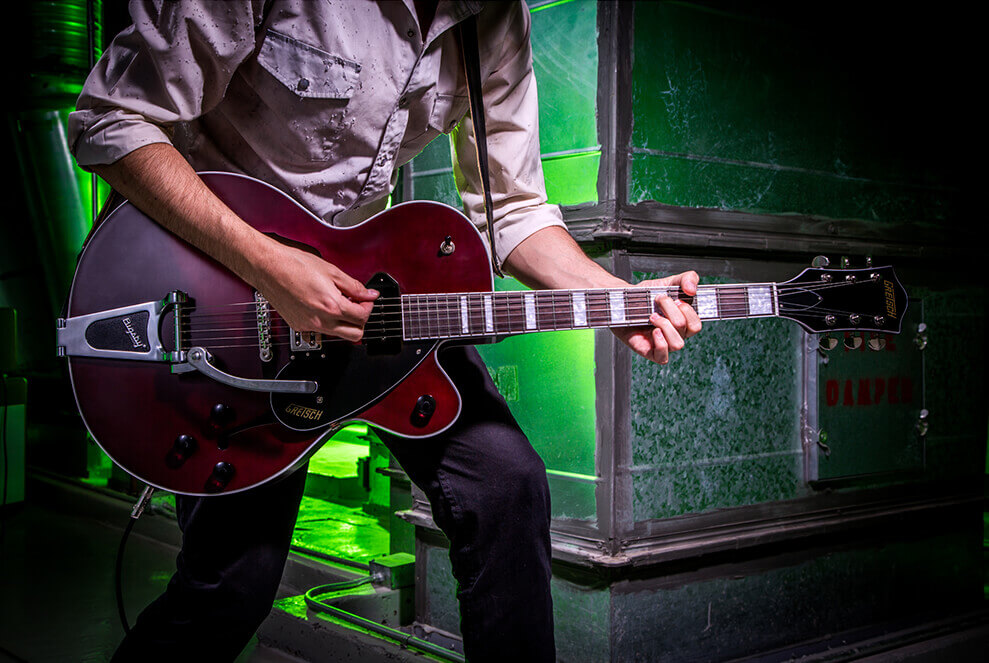 To get your hands on this fantastic Limited-Edition G2420T-P90 Streamliner you should head to Rich Tone in Sheffield. Equally, you can check out our online store.

Bo Diddley
This rock ‘n’ roll legend will always be remembered for his signature groove and classic hits. He developed an infectious rumba-like rhythm that came to be called the Bo Diddley Beat. As a result, that style influenced generations of new players. Now, he is rightly considered a legend of R&B. Not shy of an audacious guitar, Bo Diddley played a rectangular, semi-hollow Gretsch with humbucking pickups and an ebony fingerboard.

Duane Eddy
Eddy became one of the original guitar heroes after developing his famous ‘twangy’ guitar tone. The tones created by him still influence musicians and producers to this day.  He performs with a hollow-body Gretsch 6120 with F-Holes, a rosewood fingerboard and Bigsby Tailpiece. This guitar helped him score a string of instrumental hits throughout the 50s and 60s and consequently became the most successful instrumentalist in rock history.

Linda Kay
Before finding stardom, The Texas-born singer moved to Hollywood with $1000 in her pocket and began busking country tunes on Venice Beach. Then, after years of hard work and many tours, she landed a Gretsch endorsement which helped transform her from street performer to a professional musician. Now, she plays a White Penguin Gretsch with dual single-coil pickups, an ebony fingerboard and a ‘G’ Cadillac tailpiece.