Epiphone’s Inspired by Gibson offering for 2020 brings the likes of Les Paul and SG guitars that everyone aspires to play to a price that’s much more reasonable for the majority of guitarists! These models echo last year’s Gibson relaunch, with like for like copies along with more original designs. Perhaps you’ve always dreamed of owning a Gibson but the price puts them out of reach. Or maybe you’re looking for a backup instrument, or something fun to play gigs with and tour? These Epiphones absolutely look the business, and for the money there’s not much better out there.

First introduced in 1961 as the Gibson Les Paul SG, the SG has become a hallmark of rock n roll history. It was designed as a replacement for the Les Paul to try and win back customers after a decline in sales, with SG standing for “Solid Guitar.” The Les Paul name was dropped in 1963 and the SG Standard is in fact Gibson’s best-selling model of all time. This latest batch of SGs from Epiphone honours the 60s roots with a set of inspired designs.

The legendary 1960s era SG is honoured with the “tuxedo” LP-Custom style binding. The Epiphone SG Custom is decked out in all black, with an ebony fingerboard and gold hardware. There’s a pair of Alnico Custom Pro Humbuckers and CTS Electronics. One of the best-looking guitars around at the moment!

After Gibson re-launched the epic ’61 Maestro SG last year, Epiphone now turn their hand to producing a lower-cost version. It absolutely looks the part, in its classic vintage cherry finish and bold maestro vibrola bridge setup. If the Gibson version was just a bit too pricey, this beauty comes in at well under £500, and packs the highly-acclaimed Pro-Bucker pickups for a classic PAF-inspired tone.

The SG launched in 1961 and was intended to replace the Les Paul due to a decline in sales. Funny how things turned out, with the Les Paul surging back to popularity not long after. The SG grew to even bigger heights, and is still to date Gibson’s best-selling guitar of all time! This rare 1961 model is now immortalised by Epiphone, offering vintage looks and style at a very attractive price! A vintage cherry finish over the mahogany body, Pro-Bucker pickups, and the brilliant SG Slim neck that makes this instrument a dream to play. 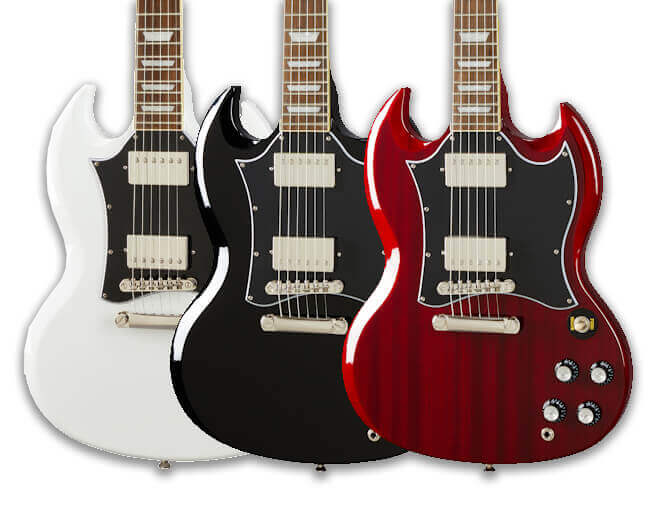 The legendary 1960s classic that powered the first generation of hard rock and heavy metal bands including The Who, Cream, AC/DC, and Black Sabbath comes alive in the Epiphone SG Standard. A solid mahogany body, 60s slim taper neck and Alnico Classic Pro humbucking pickups. There’s a choice of three colours, all of which equally doing this guitar the justice it deserves! 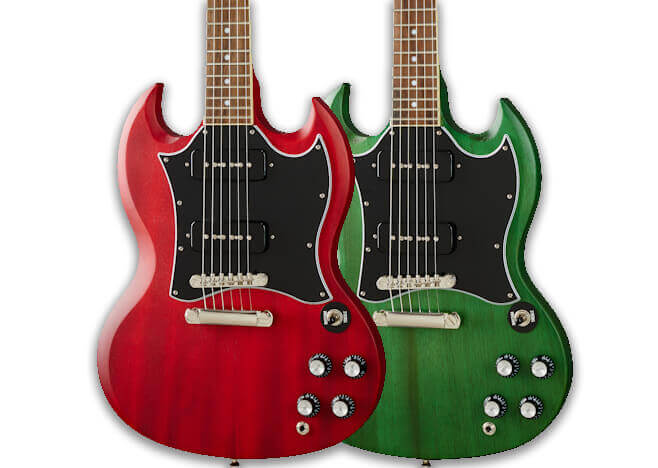 In the all-new “worn” finishes of cherry and inverness green, the SG Classic Worn packs a pair of P-90 Pro soap bars and much of the same specifications as the Standard. The satin coat finish saves time and costs in manufacture, and so these are the lowest-priced guitars in the SG range. Perfect for a no-nonsense guitar you’d be happy to take on to the stage!