Epiphone’s Inspired by Gibson offering for 2020 brings the likes of Les Paul and SG guitars that everyone aspires to play to a price that’s much more reasonable for the majority of guitarists! These models echo last year’s Gibson relaunch, with like for like copies along with more original designs. Perhaps you’ve always dreamed of owning a Gibson but the price puts them out of reach. Or maybe you’re looking for a backup instrument, or something fun to play gigs with and tour? These Epiphones absolutely look the business, and for the money there’s not much better out there.

The flagship guitar of the range, the Les Paul is the stuff of legends. There’s so much folklore surrounding its invention and development, the Les Paul is at the centre of so many landmarks in rock ‘n’ roll history. For fans of the LP, we take a closer look at what Epiphone have in store for 2020… 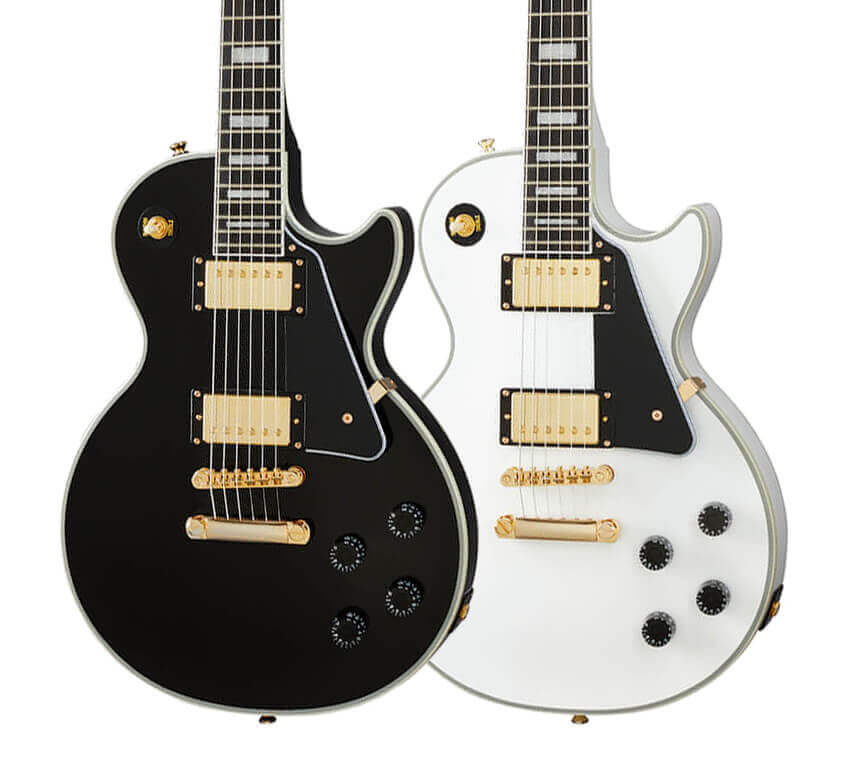 Available in the classic options of Alpine White and Ebony, the Les Paul Custom tops it for many a guitarist. Honouring the “Tuxedo” version of 1954, this Inspired By Gibson model has all the bells and whistles. Mahogany body, ebony fingerboard, gold hardware – it’s a bold look. And with Epiphone’s acclaimed ProBucker pickups and CTS electronics, the tone is there to back it up! An icon without doubt, all that’s left to decide is do you want the black or white one? 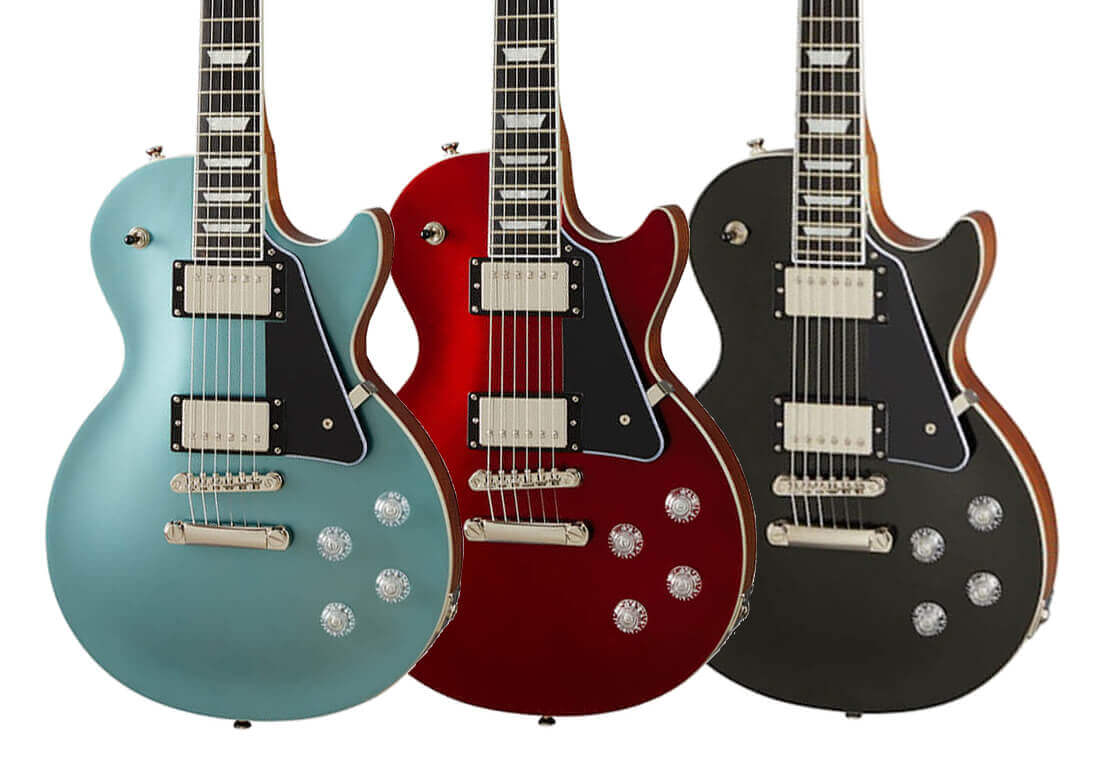 This is the evolution of the Les Paul, brought up to date with player-focused improvements and some snazzy colour options. A weight-relieved body and contoured heel joint ensure this is a very comfortable guitar. Under the hood, ProBucker pickups with coil-splitting, phase switching and a treble-bleed circuit means a heap of tonal options. There’s Grover locking tuners, GraphTech nut and an ebony fingerboard to round off the hardware appointments. 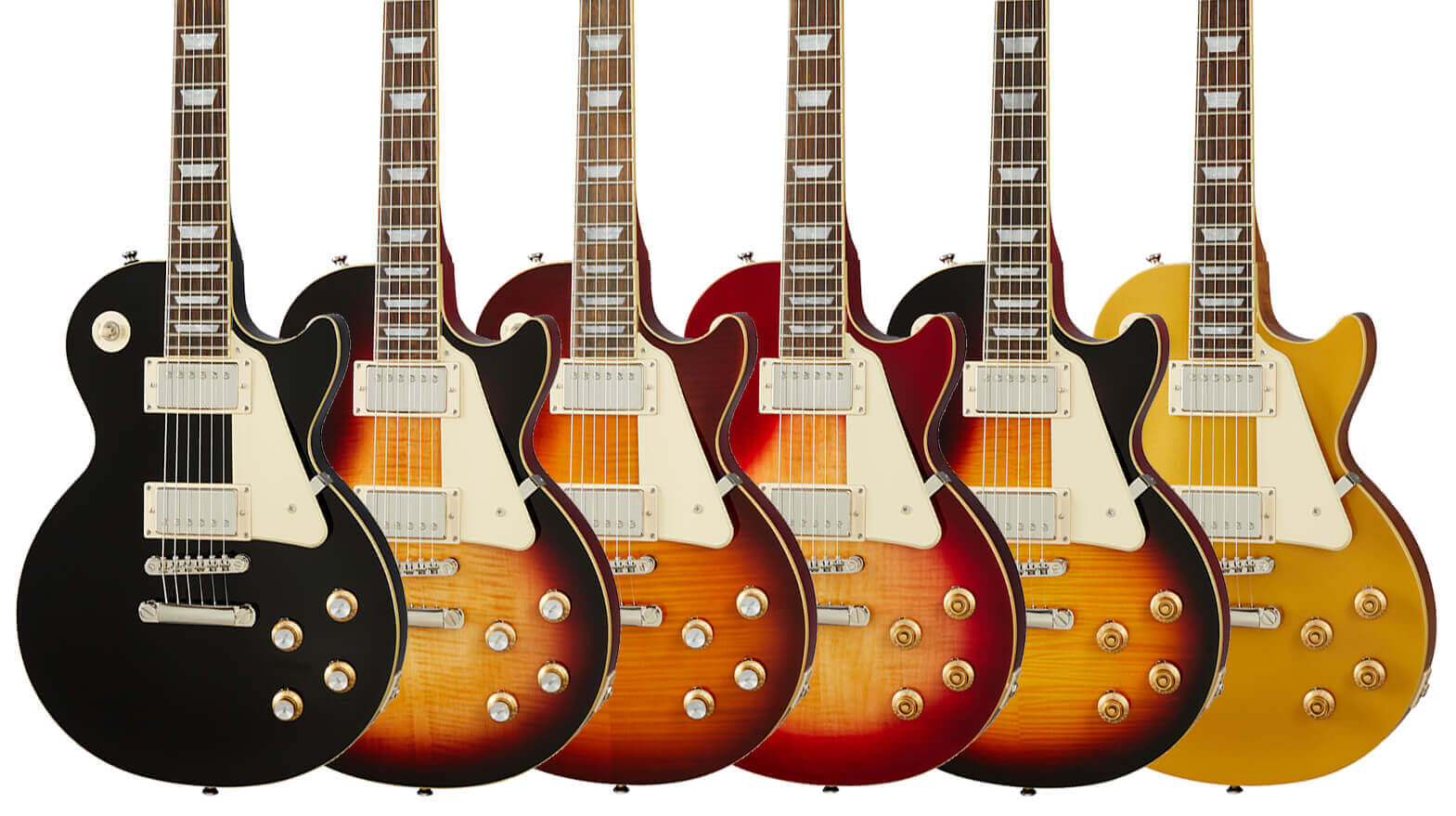 Mirroring Gibson’s move last year to produce historic-styled Les Paul models, Epiphone take the same formula with their 50s and 60s-era Les Paul Standards. The 50s model feels chunkier with its ’59 C-profile neck, using a plain maple top and a choice of 3 classic colours. The 60s features a flamed top and Slim Taper neck. In terms of specs these are largely the same – ProBucker pickups for a PAF inspired tone, CTS electronics and the iconic trapezoid inlays. 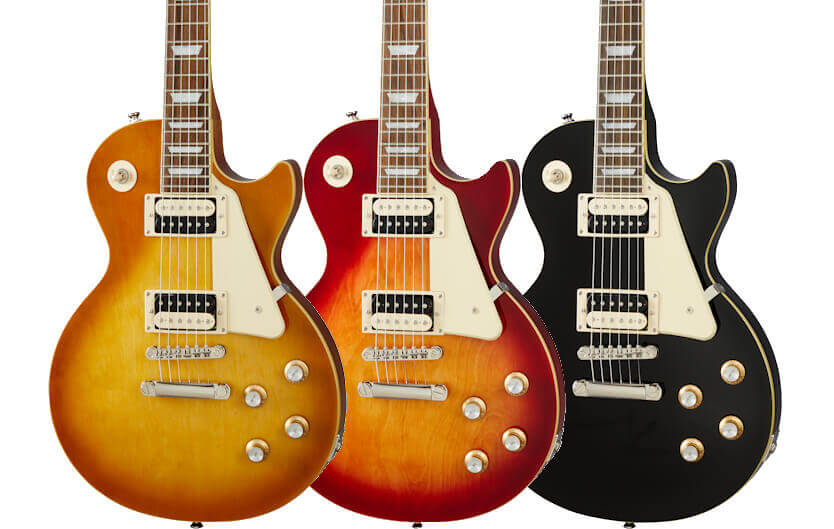 Billed as the world’s most popular guitar at a price anyone can afford, Epiphone have done a superb job on the Les Paul Classic range. Modelled on the late ‘50s Les Paul Standard with open-coil zebra Alnico classic pickups, CTS electronics, coil split, and Grover Rotomatic tuners. Available in 3 classic colours, these really hold up against much more expensive guitars. A very cost-effective guitar whether as your main player, backup or knock-about. 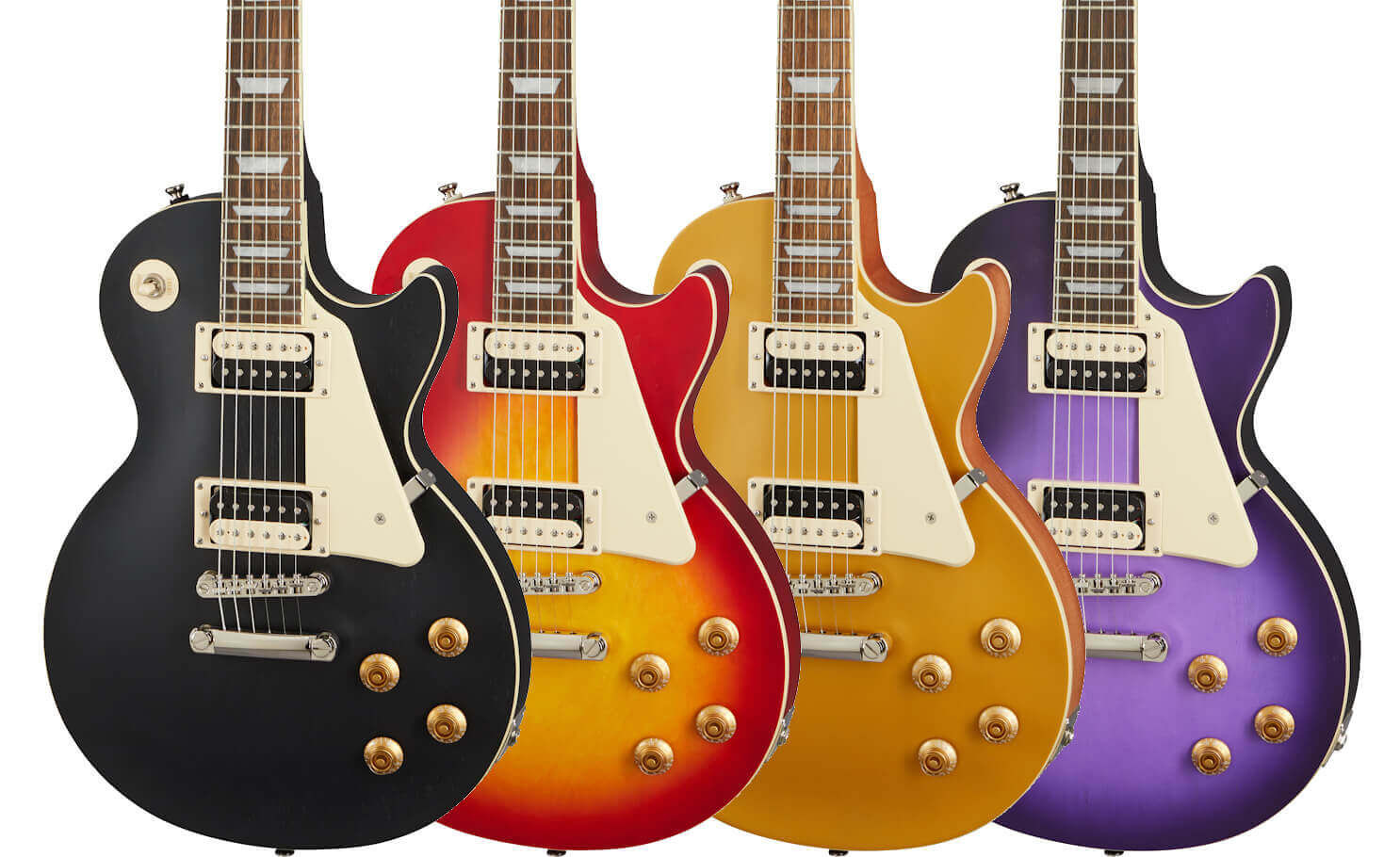 Near enough identical to the Classic in terms of specs and a similar range of available colours. These feature what Epiphone are calling an all-new vintage style ‘worn’ finish. We’re pretty sure this satin coat is more of a manufacturing time saver before anything else, but what’s nice is that saving is passed on to the customer in the form of a lighter price tag! They look and feel great, and sound absolutely authentic Les Paul. 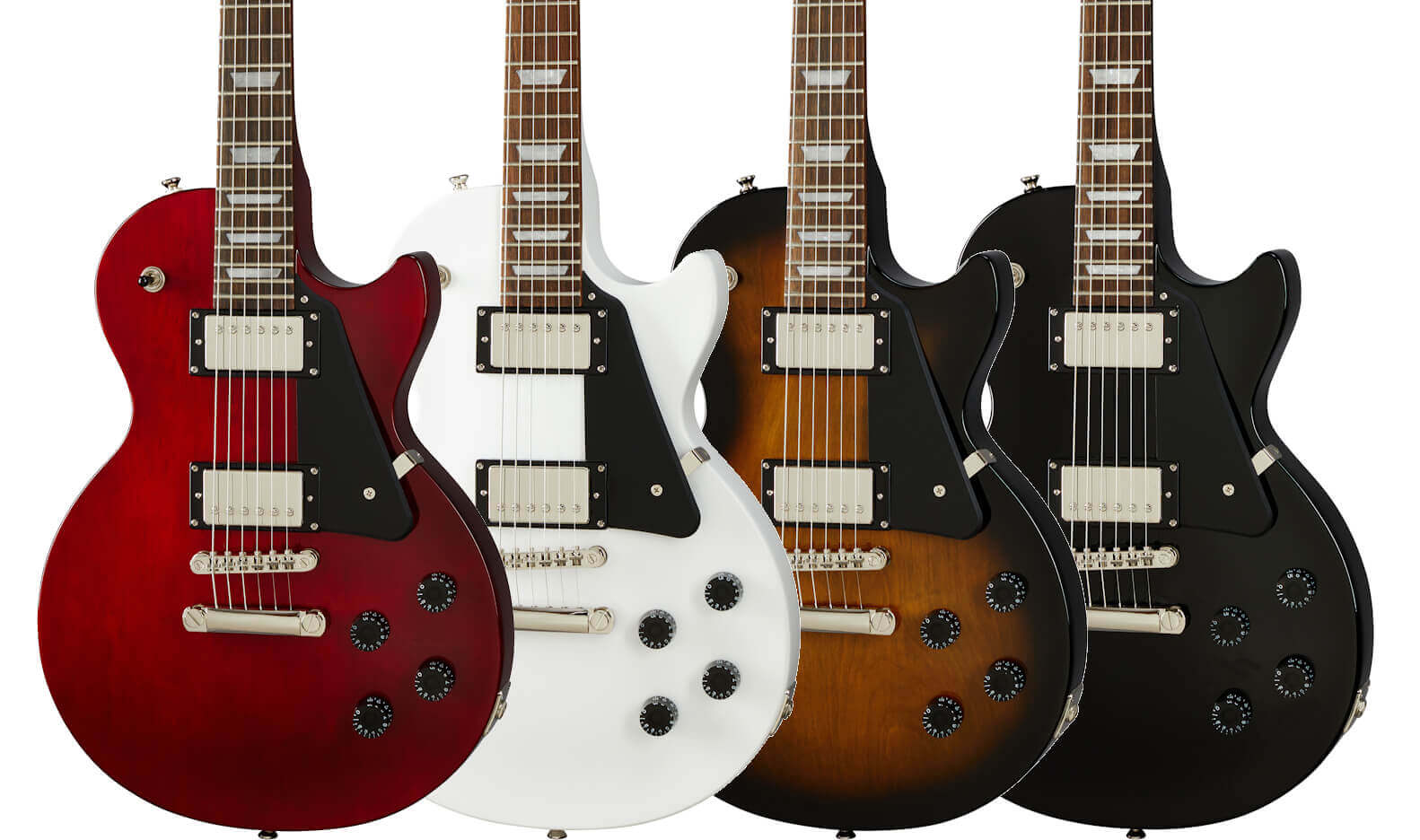 Back in the 80s, Gibson developed the Les Paul Studio. This no-frills edition was intended to give the same sound as the Standard and Custom, without the extra cost associated with decorative features. This Epiphone pays tribute to that design with its plain appearance and lighter weight. Of course there’s no skimping on the hardware, with the same Alnico Classic humbuckers, Grover tuners and bridge found on the Classic Worn and Classic. Whilst these guitars have never been about ‘the look’, we’d still be very happy having one of these hung up on the wall!

The Les Paul Special in TV Yellow is a mythical creature. Designed as a low-cost student model back in the 50s, guitarists have long enjoyed the Special’s simple looks and straightforward playability. The TV Yellow colour is another interesting chapter in the Gibson story, with various theories as from where it originated. This model packs a pair of P-90 PRO soap bar pickups and Lightning Bar wraparound bridge for authentic vintage zeal.