What good is making music if you can’t listen to it? Combined with your ears, monitors are your number one tool when producing. It’s often a good idea to get hold of a pair of top-quality speakers before you even start producing your own work.

The main thing to look for when shopping for monitors is clarity and an even reproduction of all frequencies. We’ll break that down a little further, but remember that studio monitors are a totally different beast to Hi-Fi speakers. They aren’t supposed to sound ‘good’, they’re supposed to sound accurate. They are for ‘monitoring’ the audio output, as truthfully as possible. If it sounds wrong, that’s because you need to tweak something. And if it sounds good, then trust your ears and give yourself a pat on the back!

Now onto the key considerations when choosing your monitors…

First things first, you’re going to need two. Ideally these will be a matched pair, but they must be at least the same model from the same manufacturer. This is all to do with creating an even stereo mix of your sound. Humans hear sound in stereo (using our two ears) so it follows that pretty much all music nowadays is made to suit this. Having a pair of monitors means you can adjust your stereo mix accurately, as well as focus the sound towards your mixing position. The bottom line being if your setup is wonky, then every mix you do is going to be wonky when you listen to it anywhere else. And listening to a mix in stereo is much more than twice as good as one mixed in mono!

Here we’re giving an overview of the key components of a monitor; what they do and what you need to look for. If you want to know a little more of the science behind how a loudspeaker works, there’s a great article here.

Essentially this is the box or cabinet containing the speaker, and is a lot more important than you may think! There are two types of enclosure (also called a “baffle”), sealed and open. When the driver moves, it pushes air both forwards and backwards. This creates two sound waves, one positive in front and one negative behind. Sealing the cabinet prevents these waves from crossing over and interfering. An open cabinet can increase your bass response, as you hear a combination of the positive from the front and the negative waves reflecting from the wall behind the speaker.

A great compromise between the two is a ported or bass-reflex enclosure. Ports are the rounded holes you may see on home studio speakers, and they allow the manufacturer to tune the bass response. The diameter of the hole dictates which frequencies will be accentuated. This means you can slightly extend your bass response compared to a closed cabinet, but with more control over the reflections than a totally open cabinet.

This part of the speaker converts electrical current into physical kinetic energy. This is done by fluctuating an electrical current through the voice coil, which is suspended in a magnetic field. This moves the cone back and forth to produce the sound we hear. If you remember Fleming’s Left-Hand Rule from school then this is it in action!

This is the part of the speaker that actually pushes the air to create the sound we hear. There are a number of considerations here, however size and material are the most important.

The larger the diameter of the speaker cone, the more air it will push. Remember that the area of a circle is calculated using π r^2, so a seemingly small increase in the diameter will increase the acting area by a larger magnitude. Lower frequencies require larger volumes of air to be pushed, hence bass speakers are often much larger than treble speakers. And conversely, these larger speakers can’t move as quickly so are less suited to producing the higher frequencies. Most studio monitors will have 2 speakers in them, a larger “Woofer”, and a smaller “Tweeter”. These are each specialised for particular ranges of the frequency spectrum. A bit of circuitry inside the speaker called a “Crossover” filters the audio into high and low frequencies and sends it the ideal speaker.

As the speaker cone is required to push air and move quickly, the material it’s made from needs to be strong and light. There are loads of different materials used for this, from engineered aluminium and fibreglass, through to paper, wood and cardboard. All will have advantages and disadvantages, but important aspects are strength, weight, durability and cost!

Monitors come in two varieties, passive and active (also called unpowered and powered respectively). The simple distinction here is that passive speakers require an external amplifier to power them, whereas active speakers have one built in. Passive speakers were traditionally preferred as this allows you to customise your setup having the speakers and amplifier separate. Nowadays however its far more common to use active monitors for most applications. This is largely due to advances in technology with size and weight reductions meaning amps can easily be incorporated into the speaker enclosure themselves. There is also a strong case to say that the amplifier included in a speaker will always be perfectly matched to the driver, as they will be manufactured as bespoke components. Essentially these days you’re going to be looking for an active pair of monitors for your studio.

You know all the specifications that get listed on manufacturer websites? They are vitally important for choosing yourself the best monitor. To try and make sense of the stats and figures, we’ll go through some of the key terms and give an outline of what to look for.

Straightforward enough, this simply tells you how many speaker are in your monitor. Studio monitors are usually 2-way or 3-way, meaning 2 or 3 speakers respectively. 2-way will have a woofer and a tweeter, whereas 3-way will have a midrange in between them. A 3-way means each speaker is specialised to a narrower band of frequencies, hence more accuracy. However they are often more costly.

This is the frequency of the crossover, where the sound is split between the woofer and tweeter. A critical point as the frequencies around this value will be sent to both speakers, and potentially cause some interference and muddiness. Some monitors will allow you to tweak the crossover, meaning you can fine tune for the space you’re using. Usually this value falls somewhere around 2.5kHz for a 2-way.

This is how loud your speakers will go! Louder isn’t by any means better though. Bear in mind that prolonged listening over 85dB will permanently damage your hearing. Engineers in big professional studios will mix at around 85dB, as this is where frequencies are most balanced. Bedroom setups however will be more than happy at nearer 70dB. A good rule of thumb is you should be able to have a conversation over your mix, otherwise it’s too loud. And if you mix quietly and then turn it up, it’ll still sound great. If you mix loudly and then turn it down, you’ll lose the top and bottom frequencies of your mix.

This is often cited as an important detail, although in fact it is more behind the scenes than some of the other specs. It is related to the frequency response and the max SPL. Generally, you need more power to produce lower frequencies. Anything from 70 – 100 watts will be plenty for your home setup.

Probably the main consideration when choosing your monitors, and why we’ve saved it until last. At first glance anyone would say a larger range is better, and they wouldn’t be wrong! However, this figure is quoted with a margin of error next to it. This is where is starts to get tricky, as we are looking for a flat and even response across the frequencies. An example will help to illustrate the problem:

Bearing in mind a human’s hearing is at best 20Hz – 20kHz, Monitor A has a great maximum and minimum range. However there is potential for the response to deviate by +2dB or -2dB anywhere in between, giving a total of 4dB of difference. 3dB is a perceived doubling of loudness, so some frequencies from Monitor A could be more than twice as loud as others! Monitor B quotes a reduced range, although with only a total of 1dB deviation. This is where you make the call between getting that extra 25Hz of low end or having a controlled and balanced response across all your frequencies.

The fact is neither is ‘better’ than the other, just be aware of what the specs tell you. You might love the sound of Monitor A, but when you mix on it and then listen back on your headphones it could sound terrible. Whereas Monitor B will give you a more even and accurate representation of what your mix actually sounds like.

The graph from Numark above shows some plotted frequency responses, with annotations to show particular features. Notice how all of the responses tail off significantly at the extremes of the scale, with the bass reducing very quickly below 40Hz. The “ruler-flat” response is an idealised line that will be impossible to replicate in reality, but getting as close as possible is the objective!

Okay we’re there; we’ve pored over the specifications, we know what every part of the speaker does. We’re now the proud owner of two fine monitor speakers. Time to plonk them on the desk in your studio and get mixing… But not so fast! There’s still more to consider.

In order to get the sound you’ve paid for, you’re going to need to place them correctly. Your speakers should roughly form an equilateral triangle between them and your mixing position. Placing the monitors too close to a wall or the floor will also increase the bass response, so tweak this for how it sounds in your room. Another common consideration is to place foam risers underneath the monitors which helps to prevent resonances and vibrations from your desk interfering with your sound 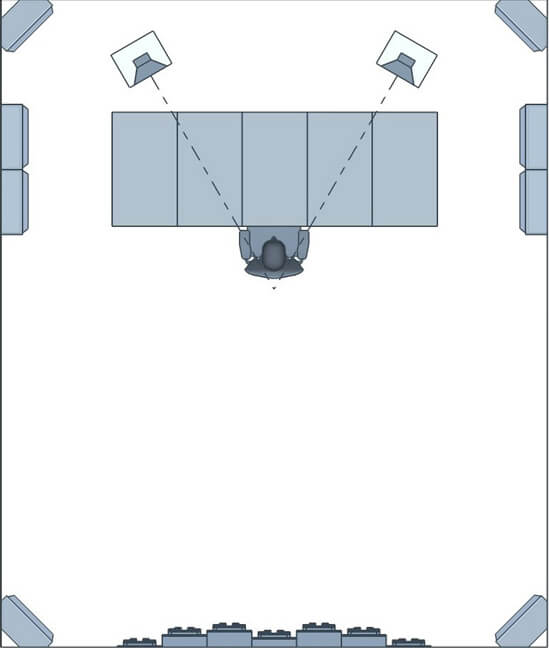 This diagram from Arqen shows the ideal position for placing monitors in a reasonably large room. Notice how the centre of the monitors point directly at the listener’s ears. As high frequencies are the most directional (ie. they travel in very straight lines),  angling the speakers towards you will ensure you can hear everything. The listening position leaves a lot of space behind the listener. This is to give space for waves to break up and dissipate around the room evenly. We can also see some acoustic treatment on the walls. This helps to spread the sound around the space and minimise hard reflections from the walls, which can muddy the sound and cause problems when mixing. Acoustic treatment doesn’t need to be expensive; using bookshelves with a variety of sized books will do the job just fine.

Hopefully you’ll now have a great overview of what monitors are for and how they work. Once you’ve got yourself a pair the best advice is to use them and listen to some music you’re very familiar with. This will help you to get a feel for how the monitors respond, and in turn inform your mixes. Also check out our Top 5: Studio Monitors!